Included are images of some animal species most commonly found as pets in North America and Western Europe today.

Pets are often used to alleviate the pains of life: loneliness, funding, anxieties or truths related to betrayals, and even a sense of meaninglessness.

Amongst parents and for children, the way that translates is: pets make it more fun and less boring at home.  Sometimes pets will be interested in interacting even when parents or siblings are not.

For parents and even adult couples, pets can be a lower risk way to teaching responsibility to others.  Pets are cheaper and normally require less commitment than children, with very few exceptions, and are less needy than most healthy wives and children and some husbands.

Please review the pet images below and then we’ll resume the discussion.

Photo by Pixabay on Pexels.com

This is just a pet kitty.  It is adorable when innocent.  People easily love these small cats despite imperfect behavior: clawing at the toilet paper and getting onto table tops being the most common “cat crimes” for these miniature cats.

Below is another pet kitty, but one that is not miniature.  These are great when their owners: 1) can afford them, 2) have sufficient space to meet their real needs, 3) have specialized training, 4) bottle feed them from about 6 weeks onwards, 5) have special licenses.    Even though that is true, and these cats are just as lovable as the miniature ones, such a large % of those kept as pets end up needing places like The Exotic Feline Rescue Center and Tiger Creek that people are still strongly advised against trying to keep them as pets.

It is that much worse when the kind below scratch the furniture or the door, or worse still, a human household resident:

Photo by GEORGE DESIPRIS on Pexels.com

What’s great about these, is that the challenge of the anti-flea shampoo is totally different.  Everyone loves that tigers are the one cat that doesn’t mind getting wet.  Of course, that sucks for water fowl who might otherwise be able to escape the unwanted interest.  Unfortunately, its worse when this wet cat wants to watch TV on the sofa.  Also, unlike the other types of cats, these ones are better at scaring off burglars than most dogs.
The reason I bring this up is that in 2018 50% of surviving tigers actually live in some form of human captivity.

Strangely enough, in many cases, adults will find the larger cats scarier than the smaller kind.  However, the bigger ones can be better training for marriage and children in that, keeping one of the larger cats well fed isn’t actually cheaper than one or two human children under 10 years old, or a cheap spouse and one child: at least for the first few years.

Most women who can develop a safe and healthy relationship with one or more large felines as part of the household can probably cope with a human man living there: sometimes human men are way more helpful but worse ones, or men having bad days are not more difficult to live with than one or more adult tigers.

Unfortunately, a woman may figure out that severe domestic problems are best handled using tranquilizer darts fired from a rifle at odd moments.  Admittedly, that’s almost as bad as any domestic abuse that might occur otherwise.

Pets really can add meaning to peoples’ lives as can other relationships and activities, but sometimes they are a sort of cop out on real mutual human relationships.

The real reasons: they fulfill many wishes to interact in some way, but most of the problems associated with them are manageable.   Often they offer unconditional love and many of them are way cheaper and easier to care for than other people, whether adult or juvenile.  They also give people a chance to work with curiosity and to learn, and to feel valued.

There is much more to the meaning of life than that, but the therapeutic value of such relationships is suggestive of what humans really value, despite what we may tell ourselves. 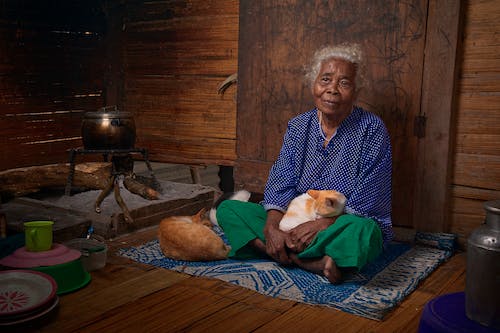 One thought on “Pets & What it all Means”

This site uses Akismet to reduce spam. Learn how your comment data is processed.